This blogpost contains a quick practical introduction to a popular post-processing clustering algorithm used in object detection models. The code used to generate the figures and the demo can be found in this Colab notebook.

A problem of too many boxes

Suppose we are building an orange detector which identifies all the oranges growing in a tree. Maybe it is will be used by a fruit picking robot. One way to “find” orange is drawing boxes around orange-like regions of the image1 and predicting the probability that the box contains an orange. 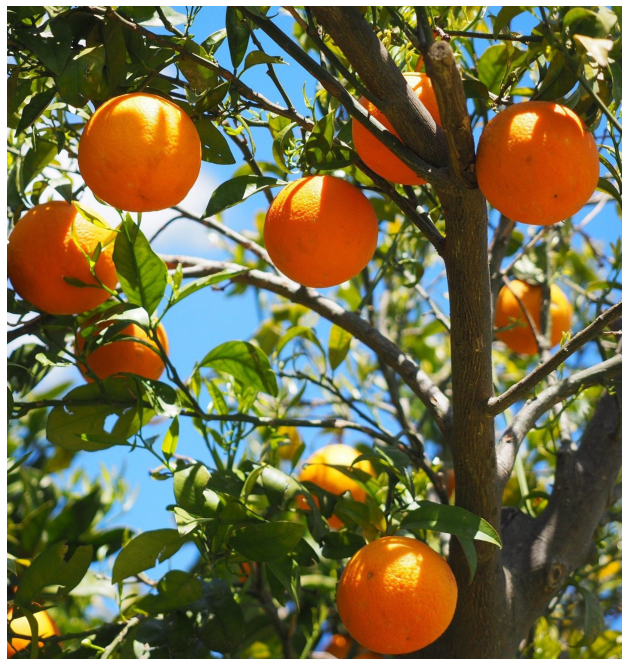 A common scenario in object detection models is that you end up with many overlapping detections as shown in the image below. 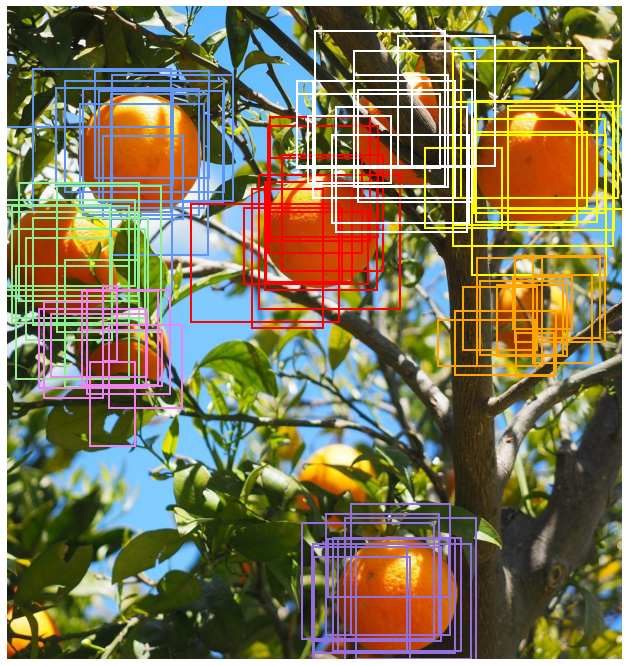 Some of detections above are evidently better than others. For example if you observe the lowermost orange fruit (with the violet bounding boxes) you can see that some of the boxes only cover about half of the orange. We would like to find a way to keep just the best ones, ideally just one detection per object. We want something that looks more like this: 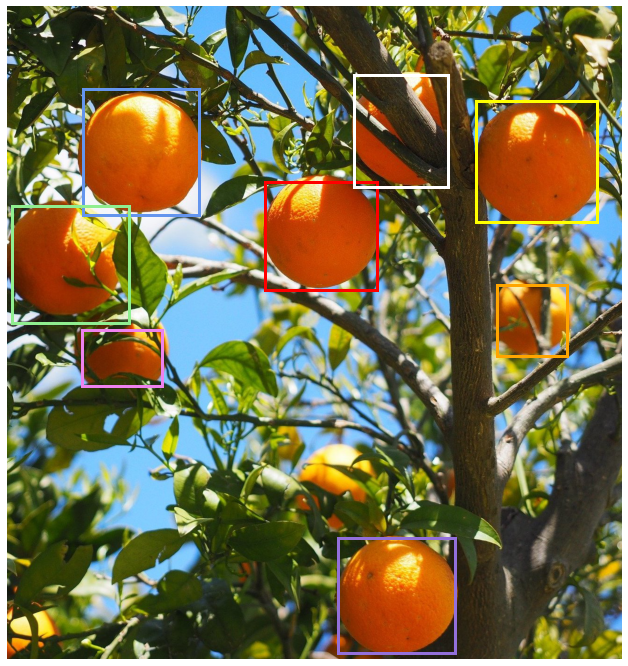 Typically each detection consists of

(Sometimes it will have other attributes like additional properties and predictions, such as masks in an instance segmentation model, but we will focus on just scores and boxes here). 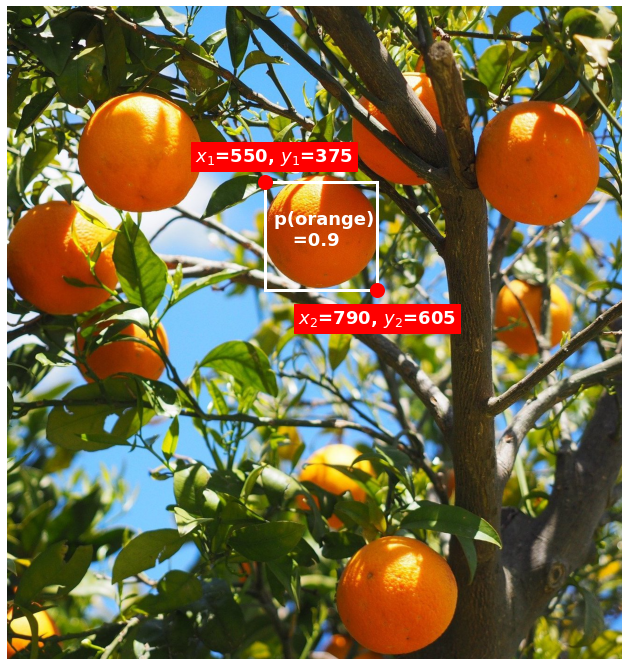 Simple methods like choosing just the top $N$ detections where $N$ is smaller than the total number of detections don’t make use of the location information. For instance all the top scoring detections could be in one region in the image even though there are predictions in other areas.

Looking at the image we see how the boxes are roughly clustered around the areas where oranges are present. Using location information we can group the bounding boxes so the ones that are sufficiently close to each another (according to some metric) will belong to a cluster. We can then aggregate the predictions within a cluster to get a single prediction per cluster.

A common algorithm is non-maximum suppression or NMS. There is more than one way to do this but here we will discuss the most frequently used approach which is a greedy algorithm.

It can be described very simply as follows:

The boxes in top_boxes when the algorithm terminates represent the final predictions.

In practice you might also select other attributes such as score, segmentation, etc. associated with the bounding box and return them along with the boxes.

For this code2 we use a box_iou function that is explained in detail in this post. Here all you should know is that, given a pair of array boxes1 of shape $N_1 \times 4$ and boxes2 of shape $N_2 \times 4$, will return an $N_1 \times N_2$ array ious where ious[i, j] is the intersection-over-union of boxes1[i] and boxes2[j]:

Let us now apply this function to our example using an IoU threshold of 0.9. This threshold basically says two boxes can be considered to belong to the same cluster only if the overlap of the boxes is at least 90% the total area covered by the boxes implying a high degree of overlap.

What we end up with looks better. In particular the fairly isolated orange towards the botttom of the image has just a single box around it but there are still a lot of boxes towards the top of image where there are quite a few oranges close to each other. 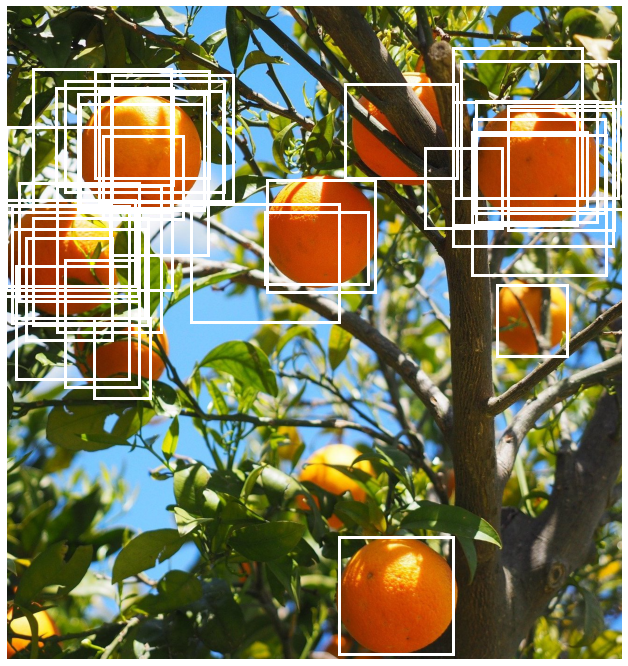 Notice also in the figure above that clusters formed the boxes prior to applying NMS are quite spread out which suggests that we should try relaxing the threshold for including a box in a cluster. The threshold is a hyperparameter whose optimal value depends on the dataset and needs to be tuned accordingly. Here let us try decreasing it to 0.5. 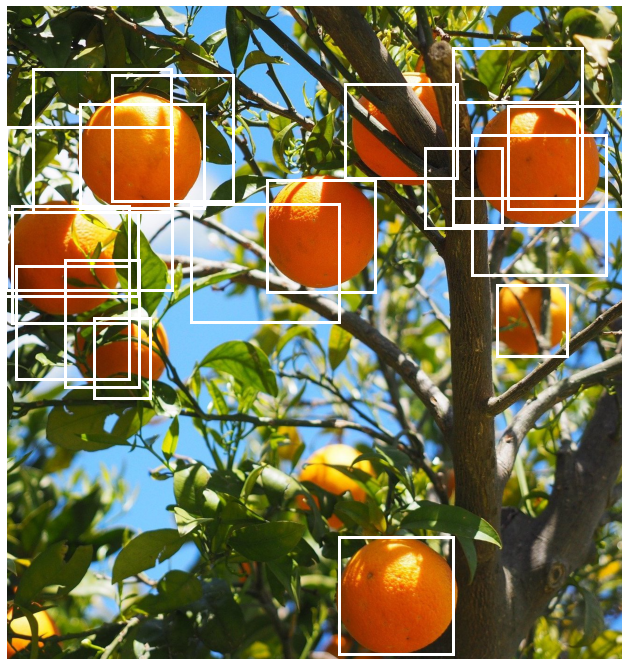 This has reduced the number of boxes but overlapping boxes still remain at the top right and left of the image. We will try decreasing the threshold again to 0.1. 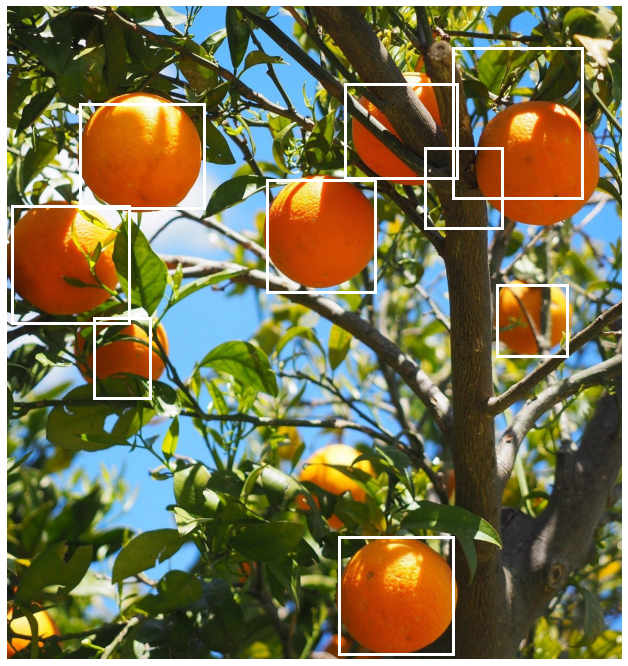 This looks a lot better. Almost all the oranges have a box that bounds them reasonably well. However an extra box that overlaps with two of the other bounding boxes remains on the top-left. We also note how the orange at the top right of the image does not have such a tight bounding box.

As NMS is a greedy algorithm it sometimes fails to generate the best clusters. In the original set of boxes there were better bounding boxes for the top right orange but they were absorbed into one of the other clusters. This can happen when one detection has a box with that bounds the object best but another detection has a better score since higher scoring detections are prioritised by NMS.